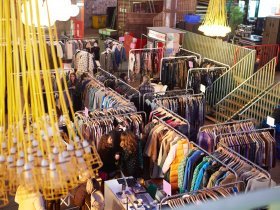 The second edition of Harrogate Fashion Week has been declared a success by organisers and exhibitors, despite tough trading conditions and Brexit uncertainty.

The event, which is the brainchild of co-founders Sarah Moody, Wendy Adams and Stephen Dixon, took place on 27-28 January at the Harrogate Convention Centre.

Buyers for independent stores based in the north of England are drawn to its convenient location while its early dateline is an attractive prospect for those further afield.

Julie Garner, a buyer based in Norfolk, comments: “It you see a brand you’d like to stock then it makes sense to buy it here; if I wait for a later show another retailer in my area may have taken it and then it’s too late.”

As organisers focus on offering value for money to brands, exhibition director Sarah Moody is excited about the prospect of growth: “We’re aiming to build a show which works for everyone,” she says. “It has to be cost-effective so exhibitors will support it and it has to feel welcoming to the buyers. That’s why, for example, we have free parking for buyers in the nearby multi-storey car park, because we don’t believe that buyers should feel they’re being charged for everything at every possible opportunity. And of course the show itself is free to all buyers.”

As it gears up for its third show this July, Harrogate Fashion Week has already amassed industry supporters is set to grow in size each season. Exhibitor Carol Capener of Carol C Collections said “It was an amazing show.” She adds: “We wrote 50 per cent more business on the Sunday than in the two days last season, with lots of new accounts opened. We are committed to showing again next season, and hope that other established brands will follow suit to see Harrogate become the show that it deserves to be.”

The next edition of Harrogate Fashion Week will take place on 28-29 July; for more information, visit: Harrogatefashionweek.com