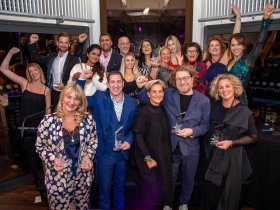 Entries are now open for the Boutique Star Awards 2022

Guests were welcomed by a drinks reception sponsored by Flint Bishop Solicitors before taking to their seats for the start of the show. Eight models graced the catwalk showcasing standout looks from the store’s SS18 collections including Paul Smith, Diane Von Furstenberg, Boutique Moschino and Maxmara.

The event also included a three-course lunch and luxury charity prize draw, which included donations from local companies such as Hoar Cross Hall, Uttoxeter Race Course, Darley Abbey Wines and The Berkeley Inns Group as well as designer prizes from brands such as Michael Kors and Oakwood.

Young Ideas is celebrating 50 years in business with a line-up of exciting events throughout 2018. To honour of its milestone anniversary, the Midlands-based retailer will be raising money for Foundation Derbyshire – an independent charity that provides grants to voluntary and community groups across the county. Proceeds from the Ladies Lunch also went to The British Heart Foundation and raised over £5,000 for the causes.

“It seemed fitting that we should do something to celebrate and also try to channel our energies to supporting a good cause,” says owner Anne Wright. “All our profits from today’s event are being split equally to help two very worthy charities – the British Heart Foundation and Foundation Derbyshire.”

Young Ideas will continue to celebrate its anniversary throughout the year with further events including a series of talks on the history of fashion by industry insiders, in-store styling events, charity raffles and auctions of designer prizes.