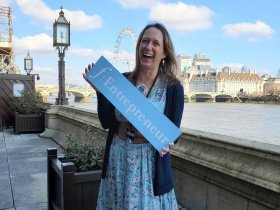 Owner Sarah Simonds, who first started the business in 2014, says the feature sparked “in excess of 400 online orders.” And while supply chain delays have slowed down fulfilment, it’s given the business a real boost during a traditionally slow time of the year.

And it isn’t the first time Artichoke has been mentioned on the breakfast show. The store was first given national exposure four years ago after Lorraine’s researchers discovered the jeans via indie marketplace downyourhighstreet.co.uk.

“The first time this happened four years ago it saved our bacon and my attitude towards selling online,” says Simonds. “We have gained all of our national exposure from Downyourhighstreet and it has literally transformed our business. Over time this has given us the courage to both develop and promote our own website, which is growing exponentially. This is admittedly from a very low base, but it is where our focus is now.”